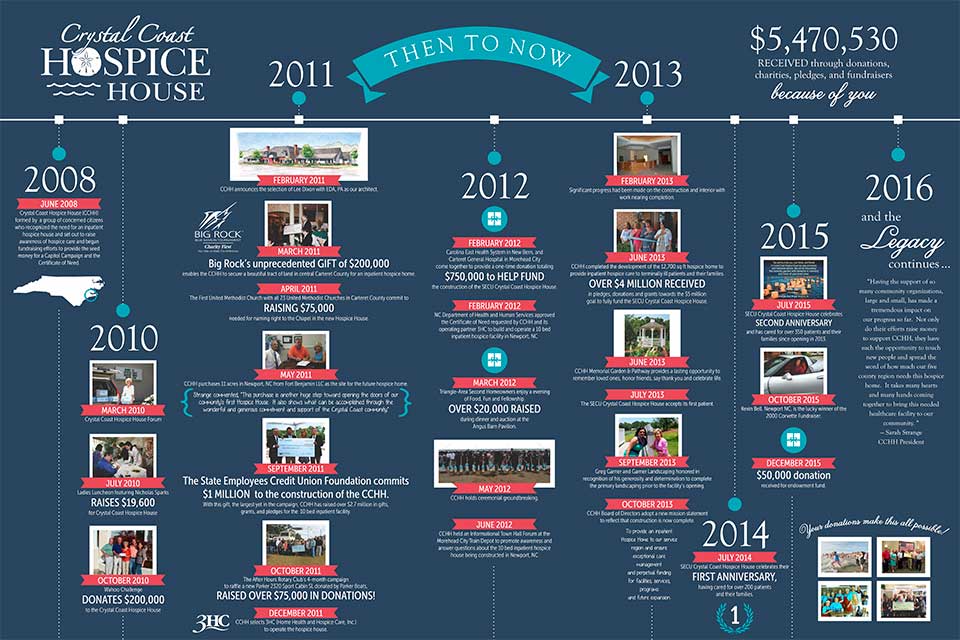 Organized in 2008 to fulfill its original mission and purpose of constructing the area's only inpatient hospice facility, the non-profit Crystal Coast Hospice House began a community awareness campaign to increase knowledge and understanding of the need for a hospice house on the Crystal Coast. The Crystal Coast service area is mostly delineated by five coastal counties - Carteret, Onslow, Craven, Pamlico and Jones.

Raising a total of $200,000 in 2009 and 2010, CCHH used this as seed money to complete and submit an adjusted needs determination application as well as to begin the development of its campaign strategy and prepare to submit a Certificate of Need application once the adjusted need determination was approved.

In October of 2010, Crystal Coast Hospice House successfully won an adjusted need determination by the State for 6 acute care inpatient beds in Carteret County that recognized the distinct characteristics of the area and the compelling need for an inpatient hospice facility in the greater region. Work began in earnest to develop the concurrent strategies of a capital campaign to raise $5 million as well as submitting a CON application. Community awareness and general fundraising continued as these plans were developed.

In a very short time, all of the necessary components for a successful capital campaign were in place and the CON application development commenced and by May of 2011, both strategies were implemented.

CCHH obtained its Certificate of Need in January of 2012 and broke ground soon thereafter. The building was designed by Lee Dixon of Coastal Architecture and constructed by Thomas Simpson Construction, both of Morehead City.

In June of 2013, the SECU Crystal Coast Hospice House held its official ribbon cutting and opened the doors to show our wonderful and generous community what it had accomplished together, for each other.

On July 1, 2013, the SECU CCHH admitted its first patient. In the first six months of operation, the SECU Crystal Coast Hospice House has served over 80 patients and families from all five counties in the service area and beyond.

SECU Crystal Coast Hospice House would still be a dream without your tremendous, heartwarming and ongoing support and generosity. Please continue to spread the word about the wonderful, caring services available here!

Stay up to date with all of the Crystal Coast Hospice House’s activities and events.

Volunteers are the heart of our organization. Get details on how to volunteer here.